Six years after a bull market, US equities are no longer the bargain they were in 2009.

The Dow Jones Industrial Average has closed at a record high 95 times since 2013, the most recent time being on May 18, 2015. Although no single metric is ideal, some fundamental valuation ratios imply that the US stock market is currently priced at a premium as compared to its own past, other countries and regions, and potential return expectations. To demonstrate this argument, we’ve provided ten charts that use these valuation ratios and return estimates.

According to the “Buffett Ratio,” the stock is 34 percent overvalued.

Warren Buffett celebrated the total market cap to GDP ratio as “probably the best single indicator of where valuations are at any given moment” in a 2001 interview with Fortune magazine. If the TMC/GDP ratio is between 75 and 90 percent, the stock market is considered “fairly valued.” According to GuruFocus, stocks that are overvalued by more than 115 percent are considered “significantly overvalued.” The TMC/GDP ratio is currently 124.1 percent, putting it squarely in the “significantly overvalued” category and approaching historic levels. 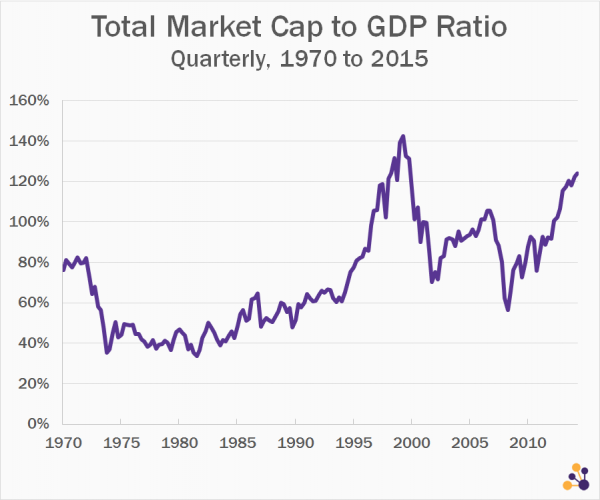 Sources: Federal Reserve Bank of St. Louis and multpl The Wilshire 5000 Full Cap Price Index is divided by the most recent GDP statistic to arrive at this metric.

The cyclically adjusted price-to-earnings ratio (CAPE) — also known as the Shiller PE ratio — is a volatility-adjusted price-to-earnings ratio. The S&P 500 CAPE is 61 percent higher than the historical average as of June 2015. Although it still has a ways to go before hitting record highs reached during the dot-com bubble, it is far above where it was at the start of the 1937-38 recession and the 1973-74 stock market crash, and it is approaching levels last seen at the start of the 2007-08 financial crisis.

The price growth of the S&P 500 has outpaced revenue growth.

In 19 of the last 25 years, the S&P 500’s return has outpaced its revenue growth — typically by a large margin.

Cumulative returns over various five-year periods may also be examined. Consider the five-year revenue growth and five-year returns from June 2008, just before the financial crisis, to December 2014. The S&P 500 has returned 81 percent over the last five years, compared to just 28 percent in revenue growth, raising the question of what will drive success going forward.

The P/S ratio of the S&P 500 is approaching historic levels.

The price-to-sales ratio of the S&P 500 was at a record high as of December 31, 2014 (the most recent date for which data is available), surpassing levels not seen since the end of 2000, just before the dot-com bubble burst. It was not even close to being as big as it was in 2007.

In contrast to the rest of the nation, the US market trades at a premium.

We may also compare the output of different ETFs using the PE and P/B valuation metrics. Consider the price-to-earnings ratios of a few Vanguard ETFs that reflect the overall stock market in the United States (VTI), all-world ex-US (VEU), emerging markets (VWO) Europe (VGK), and the Pacific (VGK) (VPL). This graph shows that US equities trade at a premium to the rest of the planet.

When comparing the price-to-book (P/B) ratios of the same ETFs, it becomes clear that US markets are overvalued in comparison to the rest of the world.

According to 10-year forecasts, U.S. equities would lag well behind other assets.

Over the next ten years, Research Affiliates expects U.S. large- and small-cap equities to have very low real risk-adjusted returns, while emerging markets, EAFE, and equities as a whole will do much better.

The returns of US large-cap and small-cap equities are projected to lag well behind those of other countries over the next ten years, according to Research Affiliates forecasts.

The Argument for U.S. Equities

According to most fundamental valuation ratios, U.S. stocks tend to be overvalued. They aren’t cheap, to say the least! However, it would be foolish to declare categorically that the stock market is clearly overvalued or that a correction is imminent. Each of these valuation ratios has shortcomings of its own. Bears often refer to historically high PE ratios as evidence of potential market corrections. When it comes to forecasting market movements, however, PE is far from ideal. Forward-looking business forecasts are analogous to estimating the future; even analysts find it difficult to do so with high precision. We may be nearing the end of the current bull market, which has lasted six years. On the other hand, the economy could remain stable for months or even years before suffering another downturn. Anyone can make an educated guess.