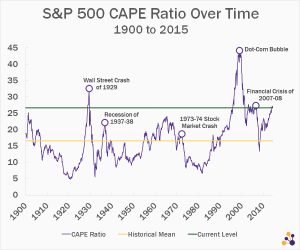 Six years into a bull market, U.S. equities are no longer the bargain that they were in 2009.

Since 2013, the Dow Jones Industrial Average has closed at a record high 95 times — most recently on May 18, 2015. While it’s impossible to predict the future, and while no single metric is without flaws, several fundamental valuation ratios indicate that the U.S. stock market is currently trading at a premium compared to its own history, compared to other countries and regions, and when considering future return projections. Below are 10 charts that make use of these valuation ratios and return projections to illustrate this point.

The “Buffett Ratio” suggests the market is overvalued by 34 percent.

In a 2001 interview with Fortune magazine, Warren Buffett praised the total market cap to GDP ratio as “probably the best single measure of where valuations stand at any given moment.” Typically, the stock market is deemed “fairly valued” when the TMC/GDP ratio is between 75 to 90 percent. Over 115 percent qualifies as “significantly overvalued,” per GuruFocus. Today’s TMC/GDP ratio is 124.1 percent, firmly in “significantly overvalued” territory and nearing historic levels. Data sources: Federal Reserve Bank of St. Louis and multpl. This metric is calculated by dividing the Wilshire 5000 Full Cap Price Index by the most recent GDP figure.

Cyclically Adjusted PE (CAPE) — also known as the Shiller PE ratio — is a volatility-adjusted measure of the price-to-earnings ratio. As of June 2015, the S&P 500 CAPE is 61 percent above the historical average. While it has a ways to go before reaching historic highs set during the dot-com boom, it is well above where it was at the beginning of the recession of 1937-38 and the 1973-74 stock market crash, and closing in on levels last seen at the start of the financial crisis of 2007-08. The return on the S&P 500 has out flagged its sales growth — usually by a significant amount — in 19 of the past 25 quarters. We can also look at cumulative returns over different five-year periods. Below, consider the five-year sales growths and five-year returns as of June 2008 — shortly before the financial crisis — and as of December 2014. Over the past five years, the S&P 500 has experienced a whopping 81 percent return, compared to only 28 percent in sales growth, which begs the question: what will drive performance going forward? 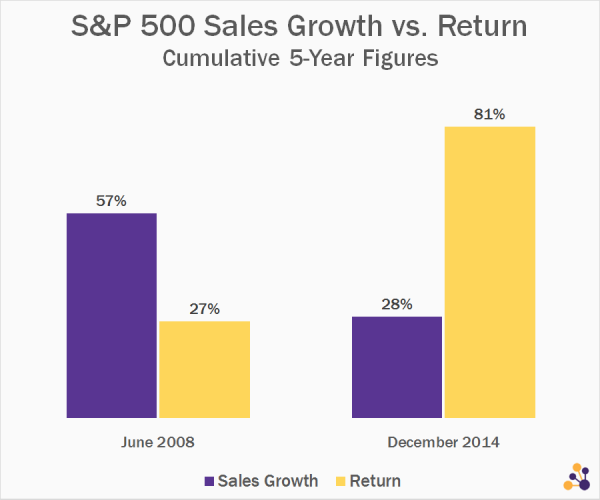 The U.S. market trades at a premium compared to the rest of the world. We can also consider how different ETFs stack up in terms of PE and P/B valuation metrics. First, consider the price-to-earnings ratios of select Vanguard ETFs, representing the U.S. total stock market (VTI), all-world ex-U.S. (VEU), emerging markets (VWO), Europe (VGK), and the Pacific (VPL). This chart illustrates that U.S. equities are trading at a premium compared to the rest of the world. A look at the price-to-book (P/B) ratios of the same ETFs suggests even more strongly that U.S. markets are overvalued, relative to the rest of the world. 10-year projections have U.S. equities lagging far behind other assets.

Research Affiliates expects U.S. large- and small-cap equities to have very low real risk-adjusted returns over the next 10 years, while emerging markets, EAFE, and equities as a whole are expected to fare much more favorably. According to Research Affiliates projections, the returns of U.S. large-cap and U.S. small-cap equities are expected to lag well behind those of other countries over the next 10 years. The Bull Case for U.S. Equities

There is no doubt that U.S. stocks appear expensive according to several fundamental valuation ratios. They sure aren’t cheap; that’s for sure! But it would be imprudent to say with no uncertainty that the stock market is definitely overvalued or that a correction is imminent. Each of these valuation ratios has its own particular flaws. Historically high PE ratios, in particular, are often cited by bears as evidence of a looming market correction. But PE is far from perfect when it comes to predicting market movements. And forward-looking market projections are akin to predicting the future; it’s really hard to do with a high degree of accuracy, even for experts. Six years into the current bull market, we may be nearing the end of it. On the other hand, the market may go months or years before the next downturn. It’s anyone’s best guess.