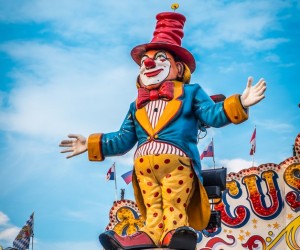 Many indexes have a quirk or two that may surprise investors.

The idea of creating a stock index may seem relatively straightforward: come up with a few rules, set a few filters, and crank out the basket of stocks that matches a particular investment thesis. In reality, it isn’t always that simple. As companies expand their businesses into new countries and industries, achieving pure play exposure can become a bit tricky.

Below are 10 bizarre facts about popular indexes and ETFs.

The largest country allocations in the iShares MSCI All Country World Index ETF (ACWI) include the U.S., Japan, the United Kingdom, and…Switzerland.

Switzerland, which makes up about 3 percent of the fund, has the 39th largest economy in the world. Its GDP is roughly equal to the state of Georgia and its population about the size of New York City. And yet it is among the largest country allocations in many global stock ETFs.

The big weighting in global stock indexes occurs because several large multinational companies that operate globally are domiciled in Switzerland; Nestle, Roche, and Novartis are among the top 15 individual allocations in ACWI.

2. EWP is hardly a pure play on Spain.

The iShares MSCI Spain Capped ETF (EWP) is the only pure play option for exposure to Spanish equities. But even this fund hardly represents a bet on the Spanish economy. Banco Santander, which makes up about 16 percent of the portfolio, generates only 14 percent of its profit from Spain. Both Brazil and the United Kingdom are more important markets:

The second largest holding in EWP, Telefónica, maintains similar geographic diversification. Spain is the largest individual market, but represents less than a quarter of total revenue. South American countries represented about 50 percent of total revenue in 2014.

3. The All Country World Index is dominated by the US.

The aforementioned All Country World Index includes thousands of stocks from 46 developed and emerging markets, but the U.S. looms large. About half the portfolio is U.S. stocks, including the bulk of the 50 largest allocations.

Specifically, 39 U.S. stocks are included among the top 50 holdings of ACWI. The only other country with multiple members is Switzerland, with three.

4. The Emerging Markets Index has some strange bedfellows.

The MSCI Emerging Markets Index consists of 23 developing economies from around the globe. While there are obviously some similarities between the component countries, there are a number of differences as well.

Specifically, the index includes both very wealthy and very poor countries. Qatar and the United Arab Emirates have some of the highest per capita GDPs in the world thanks to massive oil reserves. India and Indonesia are on the other end of the spectrum.

While most emerging markets indexes are generally consistent, they are far from identical. Because the criteria used to classify countries varies by organization, index providers disagree on the status of some countries.

The MSCI and FTSE emerging markets indexes, which are utilized by EEM and VWO, respectively, fail to agree on the status of four countries: Greece, Qatar, South Korea, and Pakistan.

6. The Homebuilders Index is a misnomer

7. The components of popular sector SPDRs would surprise some investors.

XHB isn’t the only sector ETF with some surprising holdings. The components of the popular sector SPDRs aren’t quite what some investors might expect. Below are a handful of sample companies:

8. There is substantial overlap between Value and Growth indexes.

It doesn’t take a math major to realize that there is some substantial overlap — several stocks are included in both the value and growth ETF. Johnson & Johnson (JNJ) and Wells Fargo (WFC) are two such examples.

The S&P 500 consists of 505 individual components.

There are a number of strange features of the Dow Jones Industrial Average, primarily related to the price-weighted methodology. Goldman Sachs (GS), which Apple could purchase with about a third of its cash, represents about 7 percent of the index.

Our Advice: Look under the hood.

All of the nuances highlighted above are relatively harmless; a portfolio is unlikely to tank because an investor inadvertently included exposure to hardware stores along with pure play homebuilders. But investors should be aware that along with the many benefits of rules-based indexing (such as low costs), there are some quirks as well.